The owners of Robin Hood Farms started with the modest intention of  owning “a horse.” Drago Kragulj was raised on a farm that still used their horses to work the land and take them around the mountainous countryside. His wife, Robin Hood Kragulj was a suburban girl and knew horses only through Walter Farley’s novels. Probably this was the reason that their second horse purchased was a black Arabian colt sired by Saud El Warsaw. Drago named him Robin Hood. Robin says that a man that wants to own horses will do anything, even name the horses after his wife, if that is what it takes. The great beauty, elegance, intelligence and athletic versatility of the Arabian horse is responsible for the size and scope that this breeding operation has become.

The owners were fortunate in acquiring a spectacular mare group including the US National top ten filly, Miss Starbuxx by Magic Dream and regional champion filly, Sylviah WLF, sired by ATA Bey Star. They own three Padron Psyche daughters, all of which have produced wonderful horses, and all quite different from one another.

In 2005, a wonderful opportunity arose when they were able to purchase the Scottsdale top ten colt, ROL Intencyty. This colt went on to become the 2005 Canadian Champion and US National top ten Stallion. After capturing another top ten title at Scottsdale in 2006, the Kragulj’s decided to take him home to breed him exclusively to their mares. ROL Intencyty was purchased based on what a tremendous horse the prospective buyers saw in front of them. It was quite odd that they did not understand what an experienced breeding program that he came from. Still they were determined in what stood before them. It was years later when the results of breeding him were quite apparent that they began to understand the line breeding that produced such a stallion. His pedigree includes five crosses to Serafix, the famous Crabbet bred stallion purchased by John Rogers. Serafix has eleven crosses to Mesaoud. The Blunts had written that Mesaoud was the best horse imported by them. We know that they must have imported some other very good ones, since the farm has a lot of those bloodlines also. John Rogers continued his breeding program with the importation of the stallion Karadjordge, a polish breeding purchased by Patricia Lindsay. The final Rogers stallion in this pedigree is Natez, a WitesII son. The Rogers breeding of the offspring of these three stallions is the foundation of the sire and the dam of ROL Intencyty. This foundation has been greatly enhanced by the out crossing to Cytosk, the grandsire on the dam’s side. An attempt here is to make a one hundred year old story very short. The owners are quite pleased with this pedigree that has produced an incredibly beautiful and athletic Arabian horse. The belief in this stallion has driven this program, which was already quite well blessed with wonderful broodmares, before him. They hope that you will agree with them. 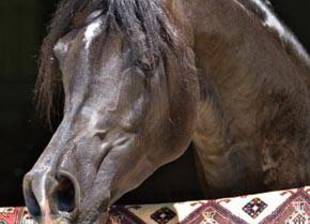 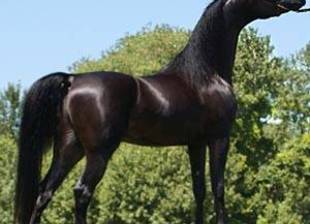