In 2002, within the green rolling foothills of Washington State, the world was honored with an amazing colt. Named in honor of his pure white dam, Intensive QCA and national champion producing black sire, Out of Cyte, he was destined to become a “Legend Maker.” What sounds like a storybook beginning, in fact continues to materialize with the success of ROL Intencyty and his champion offspring. With a magnetic look and heir of royalty about him, he grew up and prepared himself for the journey that lay ahead. An early glimpse of show ring sizzle was evident at the 2005 Scottsdale Show as he knocked on the door of class-winning placement, taking home a third place out of 18 commendable stallions in Arabian Stallions. His beauty, scope, and majestic carriage were flawless, accentuated by his deep and rare black color.

After years of honing their eye for quality Arabians, Drago and Robin Kragulj of Robin Hood Farms came to the Scottsdale Show in 2005 with the promise to one another that they would observe and have a good time in the excellent weather. And it was indeed a good time. They had no horses to show, so they simply spent their time enjoying other owners’ horses. It will always seem fateful to them the day that they walked into R.O. Lervick Arabians’ stalls and admired a beautiful purebred filly. Her name was ROL Snapshot—already a champion. The owners couldn’t bear to part with her, so they showed the Kraguljs the video of her champion brother. This video inspired the Kraguljs to see him in person—something they will never regret as Robin shares, “The next day was proof to us that some horses can be even more than their photos or videos can capture. What we saw in Intencyty seemed too good to be true; we feared our own judgment!”

They saw a strikingly beautiful stallion. “We loved how he exuded greatness in the amazing shape, length, and refinement of his neck, in his excellent tail carriage, and in his well-proportioned body,” adds Robin. For the Kraguljs, it seemed to be destiny that he was still available. The deal was struck and they went home both jubilant and still fearful that they had purchased an apparition. But as he arrived home, he thrilled them with more of his great attributes like his amazing movement and superb intelligence.

The story continues shortly after arriving with a very important phone call. On the advice of prominent breed specialist, Debby Cain, the Kraguljs called Jeff Schall of Shada, Inc. This call began their working relationship. “It was an absolutely special time in my career,” reflects Jeff. A little known fact is that Jeff did a leap into the air following the call. Indeed the so-called leap of faith has led to the opportunity of a lifetime for everyone involved. Jeff continues, “So many memories make it hard to single out just a few. Certainly the magical night when Intencyty earned his National Champion Futurity title that same year and put on a show for the ages rises to the top.” Jeff finds himself smiling when he thinks of the seemingly innocent young stallion that first arrived at Shada in 2005. “Intencyty was good hearted, kind natured, and almost thoughtful, if such a thing is possible, towards both people and mares. As things have evolved over time and Intencyty’s offspring have become increasingly prominent, so has his demeanor. On some level it’s almost as if he knows or realizes that he has become a “big deal.” This is exactly how the breeders as well as everyone at Shada feels.”

In this stallion’s journey, there have been important stepping-stones, and now the end results are coming to fruition. These are amounting to greatness in the horses that he produces. “Although Intencyty is a specimen in himself, we have found that he is truly a catalyst in creating legends—a genuine ‘Legend Maker.’”

His world famous daughter, RH Triana, has become a legend herself. In 2011, she raised the bar as a new breed standard, garnering numerous unanimous titles from Scottsdale champion to multiple national championships and everything in between, including champion at the World Cup Show in Las Vegas. One of Intencyty’s sons, Abrakadabra RH, is a Chilean national champion and is producing wonderful offspring on another continent. Last year at Scottsdale another Intencyty daughter, AJ Haila, was Scottsdale Reserve Champion Filly and went on to the Las Vegas World Cup to become the highest scoring filly at the show. Intencyty’s success can be measured in the numerous sales at excellent prices, as well as the substantial offers being declined as the owners hold them close to their hearts as prized possessions. In these instances, Intencyty’s popularity has soared alongside the value of his foals. In closing, Jeff offers, “It is unbelievably exciting to have such a unique gift to share with the world. Now is the time to join us and “Make a Legend” for yourself.” 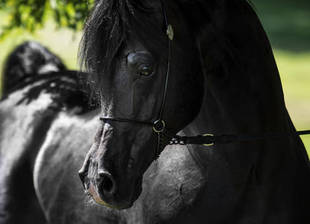